Recipe for success
Most ice-cream was made in the family home. First the milk was boiled, and the makers would add their various ingredients. After boiling, the liquid was allowed to cool in several large metal buckets, each covered with a white cloth, until the following day. The smell of the delicious cooling milk would waft up from the cellar and pervade the living quarters upstairs, sometimes proving too much of a temptation for the children. They would run into the kitchen, take a cup, and go down into the cellar to sample the mouth-watering creation. Every family had their own secret recipe, so they thought. And everybody thought they made the best ice cream!
The next day the freezing would commence, a particularly strenuous task. The freezing tub would be packed with ice and salt, purchased locally. The churning was done by hand. The ice cream makers would turn the tub again and again until the product was finally frozen. It was a job which was always undertaken in good spirits, and many would accompany their work with a favourite Neapolitan song. In those days there were no motor vehicles for the ice cream men. The Italian vendors used their imagination and gift of turning their hands to anything, and built their own push and pony carts. They carved figures and scenes of their native Italy, painted them in all colours, and finished them off with their names on the sides. Most vendors had their own rounds or selling pitches.
Ancoats

GIANELLI'S, THE BEST CHIPS IN LIVERPOOL 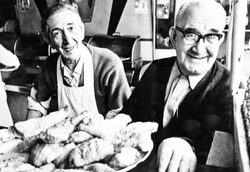 JOHN & FRANK GIANELLI
This 1975, photograph features brothers John and Frank Gianelli behind the counter of their well-known fish and chip shop on the corner of Christian Street and Islington Place.The popular Gianelli family were in business in the neighbourhood for eighty years and provided a service to generations of families.

Frank Gianelli, was born in a room over the shop in 1902, and besides being in the family business all his life, he was a very prominent member of the Holy Cross Church community.
During the war years the area around Christian Street, was devastated by enemy bombing and during an air-raid one night in May 1941, a bomb exploded near to the shop which shattered all the windows. But with typical 'Scottie Road' determination, the family cleared up the debris and had the 'chippy' open for business by dinner-time the next day.
Their determination was typical of the resolve demonstrated by the residents of the area during the blitz whose message clearly was, "It will take more than the Luftwaffe to break our spirit."

Gianelli's had a reputation for making the best chips in Liverpool, and the shop attracted customers from a wide area. A former employee of the Empire Theatre in Lime Street, revealed that in the 1950's, many top American show-business personalities appeared at that venue.
Some of the cleaners who worked in the theatre, went over to nearby Gianelli's to buy something for their lunch, and when they returned the tempting smell of the fish and chips prompted the likes of Frankie Laine, Johnny Ray, Russ Conway and Liverpool's own Michael Holiday, to send someone over to Gianelli's for fish and chips for them!

Sadly like many other shops and pubs' which had served the community for years, Gianelli's, was also a victim of the planners dreams to create a motorway out of the city, and the famous old shop was demolished as part of the second Mersey Tunnel project. 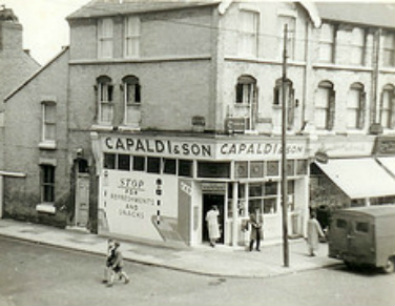 Orazio Capaldi was born in San Michele, Cassino, Frosinone, Italy in 1886.
Orazio married Maria Grazia Innelli in Dublin, 1915. They then lived in
Liverpool for around 10 years having 4 Children until moving to Bristol. Maria
Grazia Innelli's parents were Agostino Innelli and Francesca Lucia Volante.
Francesca (aka Lucia) was Sister to Vincenzo Giacobbe Volante who Married Maria
Grazia D'Annunzio. Vincenzo and Maria had many Children, one being Maria
Maddalena Volante who married Luigi Coletta. Luigi was one of the accordion
players of 'Macari and the Dutch Serenaders'. The main member was Antonio
Macari.
Michelina Capaldi had married Antonio Macari in Dublin, 1918 who was before
living with his Parents and Siblings in 54 Gerard Street. Antonio and  Michelina's two Sons grew older to become Musicians like their Father.
Brothers Lorenzo and Giuseppe Macari were living in London where they Founded  'Macari's Musical Instrument' Shop. Antonio and his Serenaders toured the UK  playing at shows along with Jim Capaldi’s Father Nicola Capaldi (Michelina’s 2nd  Cousin) and also starring in films such as 'The Penny Pool'.

Alessandro Capaldi was born in Bristol, 1891. He travelled to Detroit, USA  from Liverpool in 1913 with his cousins. He returned in 1914, and then married  Fiorinda Colacicco in Edinburgh, 1918. By the mid 1920's he was living around Smithdown Lane, Liverpool and had a  Confectionery Shop at 272 Smithdown Road. By 1948 he had ‘Capaldi's Milk Bar’ at  266 Smithdown Road which is now called Volute. Alessandro had lots of help from his Wife, Son's and Daughters to run the  Shop, and when he died in 1967, his Son Giulio took over the Shop.
An old customer said; "The Milk Bar was a good place to meet up with girls or  your pals. They had American style booths to sit in and the jukebox was always  on and up to date. I seem to recall the Ice Cream was the best too! I recall  playing Marty Robbins Devil Woman and Bobby Vee - The Night Has A Thousand Eyes.  They must have stuck in my head as I can still sing those hits today! All before  the Beatles took off. Frankie Vaughn was big in Liverpool then and he had a hit  with Tower Of Strength. And of course there was always Buddy Holly on. Brenda
Lee got lots of plays as well".

All the siblings mentioned were involved in many types of food business like,
Ice Cream, Fish Fryer, Fruit Sellers, Confectioners to Restaurateurs, and what
better place for them to start, in amongst a thriving Italian Community of
Liverpool’s Little Italy! 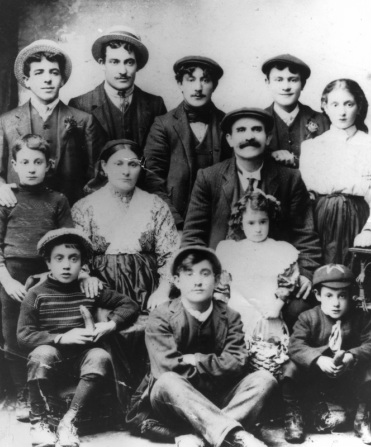 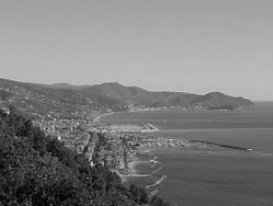 CHIVARI ITALY
ITALIANS, like many other Europeans at the turn of the nineteenth century, left their homes in search of a better life in America – but not all of them made it to the New World.
A large number only got as far as Liverpool and stayed to create their own Little Italy in the city.
One such family was the Podestas, who came here at the start of the nineteenth century from Chivari Genoa.
A living relative of the family, Paul Podesta, has been researching his family tree for over 20 years and has uncovered some startling secrets – like his family may have missed out on creating an ice-cream making empire.

'); //]]> He says: “My great grandfather John Podesta came to Liverpool first before going back to Italy for his family and setting up home here. “They had a chestnut stall to begin with when they arrived in Liverpool so they made a life for themselves from not a lot at all.”
The family then moved into ice cream making. They started by mixing ice cream in their back rooms, scooping it into cones sold from the three-wheeled carts they pushed around the neighbourhood and eventually opened shops to supply both parlours and wholesalers.

Paul, says: “One story that I have heard is that my great grandad had turned down an opportunity to buy a machine which compressed ice cream to be sold in tubs. “My great grandad apparently said the concept would never catch on and instead Walls bought it. I just hope the story is not totally true or we have really missed out.”

Like many Italians who came to settle here, the family lived on the cobbled streets off Scotland Road which became known as ‘Little Italy ‘. The area they came to was so far removed from the seaside beauty they had left behind and the Italians tried to introduce their own culture, colourful religious processions and unique community spirit to their new home.

There was, of course, the ice cream and the tomato sauces, but these immigrants learned the customs of their hosts very fast and soon they were deep-frying cod. At first they worked in their own homes in the cobbled side streets on the eastern side of Byrom Street. Then families like the Podestas opened shops and cafes.

John Podesta owned a fish and chip shop at 14 Currie Street. He opened two more shops and left these to his children who continued the family name. The family also made a name within the top ice cream traders. The Podestas and another Italian family, the Fuscos, were thought to compete for the top end of the business. They traded from across the street in shops sited exactly opposite each other. The families were such great friends, they bought houses next door to one another and the original inhabitants from both families were even buried alongside one another. 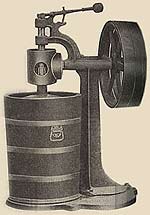 A steady flow of Italian immigrants arrived in Liverpool between 1860 and 1912, and settled in the cobbled side streets on the eastern side of Byrom Street. A census report for 1891, reveals that there were a significant number of Italians living in Gerard Street, Hunter Street, Lionel Street and Whale Street. The growth of the community was very distinctive and by 1913, it was estimated that there were in excess of 400 Italian-born settlers in the tiny cluster of streets which by then had become affectionately known to local residents as 'Little Italy' Although in the early days the immigrants suffered some hardships, by 1920, the residents of this close-knit community had become an integral part of Liverpool's society. Many of the residents earned a living as musicians, organ-grinders, hotel workers, knife-sharpeners and street entertainers. But it was in ice-cream making that several families distinguished themselves. Working to their own recipe the delicious commodity was made in the homes of the individuals then sold around the streets from little carts. Other families opened fish and chip shops throughout the city and as a result of their business enterprises, the Santangeli, Gianelli, Podesta, Chiappe, Frediani and Fusco families became part of the folk-lore of the locality. 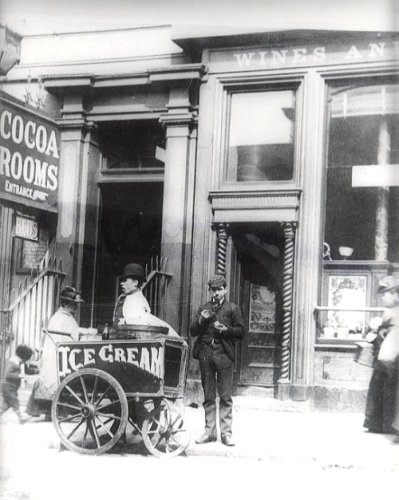 Originally the ice-cream was sold in licking glasses, which was very unhygenic, nevertheless it was one of the most common occupations of Little Italy. By 1900 ice-cream vending had replaced nearly all other jobs including street entertaining and knife sharpening. The ice-cream vendors became known as The Hokey-Pokey men. The phrase was derived from the Italians shouting "O che poco" meaning "Oh how little"  (refering to the price) and the English roughly translated it to Hokey-Pokey. The phrase caught on so much that the ice-cream vendors had it written on the sides of their ice-cream carts.